“I want them back, Izaak!” cried Santa, blushing slightly at his own outburst and casting a glance at Sven, the electric reindeer. “I nearly froze behind that tin beast and could hardly hold the reins, my hands were so cold.”

Christmas was only a few days away, and Santa’s calls to get his biological reindeer back had fallen on deaf ears. The Elf Controller, Bartholomew, had reveled in the growth of quarterly earnings from the Global Outreach Program, which licensed one magic reindeer to each major city worldwide, along with official Santa merchandise.  As Bartholomew grinned ever wider, Santa grimaced ever more sourly.

“But Santa, we can’t bring them back – Sven was a huge success, and with a stable income stream every month from licensing, we can afford to solve your thermal comfort with technology,” explained Anastasia, who had become Santa’s handler as his administration grew several layers over the past year. 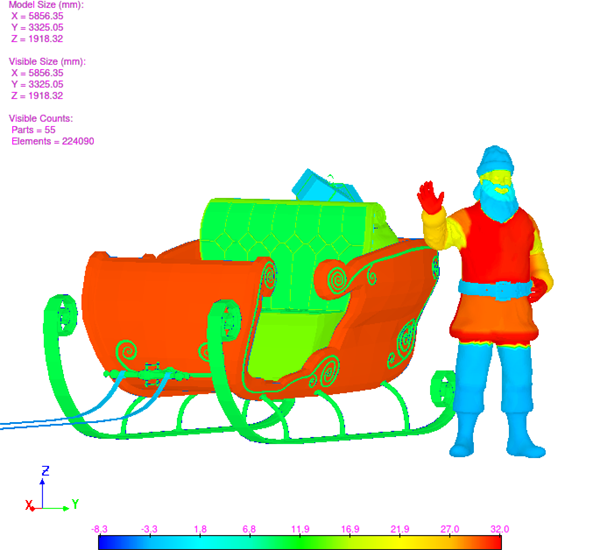 Santa raised a bushy eyebrow at Izaak and held his gaze as he drew out his handkerchief and blew his nose. He had taken to calling the Global Outreach Program ‘GLOP.’  “You tell Bartholomew our whole operation is put at risk by his reindeer GLOP.  If I can’t fly because I am shivering too much, we could have a Catastrophic Reindeer Attrition Problem. And that’s an acronym I won’t make for you,” grunted Santa, quite satisfied with his non-acronym. “Magic reindeer leave a tremendous plume of excess metabolic energy in their wake; I rode comfortably for centuries in their warm turbulence.” Waving his hand at Sven. “Now I freeze behind that edifice to efficiency you birds dreamed up. Get me Donner and Blitzen, or for goodness sakes get me a climate control system.”

Izaak and Anastasia exchanged a quick glance, then replied, “On it!”

Back in the Elfin Engineering and Research Center (aka the EERC), Anastasia mused, “Well, we need an energy management plan, Izaak,” as she fired up TAITherm, and loaded her human thermal model of Santa. “Fortunately, we’ve validated this model of him from his cave diving vacation in Mexico, and TAITherm supports his 90th percentile body mass.”

“I’ll fire up GT-SUITE and get a system load model that we can couple to see how much load our HVAC options will draw from Sven’s batteries.”

Izaak began working. “We need to keep his core temperature within one degree Celsius from Helsinki to Santiago.”

“Wow, look, Izaak,” said Anastasia, “He should have been dead from hypothermia last year, with a core temp of 92F, so I have to agree with his dim assessment of thermal comfort. We could recreate a warm plume with ‘artificial metabolism’ from Sven and blow warm air at him, just like in the old days.”

“But,” said Izaak, “looking at GT-SUITE, a hot air source might impose a significant energy load on the batteries than a radiant solution, and a crosswind might render the plume ineffective.”

“I forgot about the crosswinds, those are especially bad around the Bering Straits,” mused Anastasia. “And near Albuquerque,” chimed in Izaak. “Our ReinDL data logging software captured the conditions in real-time.”

“At least we have good boundary conditions, so let’s make a coupled model between TAITherm and GT-SUITE. First, we test warm air, then let’s try some radiant panels and a heated vest under his coat,” said Izaak.

As the two quickly setup the models, Santa wandered in check on them. “Do I get Comet and Cupid back?” he asked. 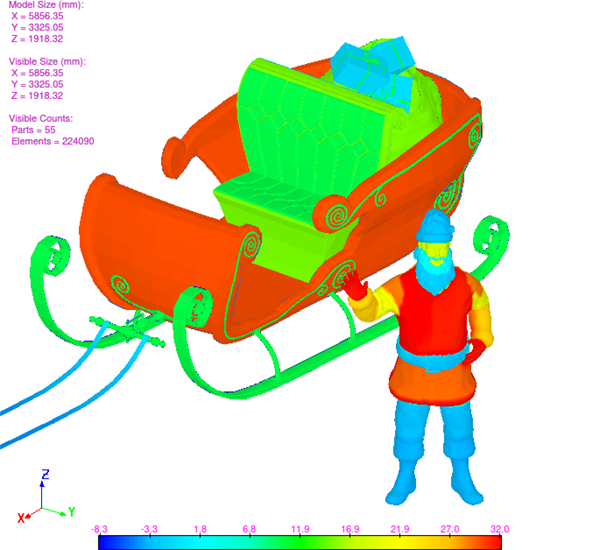 “It’s looking like those two get to stay in Chicago and St. Louis,” replied Anastasia. “Let’s give this a few minutes to run while I figure out a power level for your heated vest. How many calories would you say you eat per day?”

“Ho ho ho!” Santa laughed, and he almost never used that laugh outside of his performative character spaces. “A true gentleman would never divulge such sensitive material. It could reveal sources and methods,” he grinned.

“Well…” Anastasia mused, “Let’s assume 55 watts for starters. And we’ll impose some power around your feet and along the dashboard. Izaak, do we have system load information for the heated air option? We can review while the radiant solution runs.”

“Done,” said Izaak, pointing to the large presentation monitor in the EERC, “warm air HVAC would take about 3300 watts and your comfort will vary over time.” Santa’s eyes narrowed as he took in the plot and asked, “I’d have to make more battery swaps, wouldn’t I?”

Anastasia leaned in, “In fact, you’d have to make several extra swaps, and that would take more time, so you’d need to leave before dinner and take a bag lunch maybe.” Santa’s eyes widened in horror.  Izaak stepped in to give hope of relief.

“But! We have an alternative approach. Here you see a radiant and wearable solution – less than 1000 watts for radiant panels and a heated vest. With that power reduction, you could leave after dinner.”

Santa heaved a long sigh of relief and spoke just above a whisper, “Make it so. Have Bartholomew coordinate a few extra battery swaps.” A wide grin broke onto the two elves’ faces as they stood and replied,