“She’s a beauty, Anastasia,” said Santa, running his hand along the smooth lines of Sven, the electric turbine powered robotic reindeer. “I can definitely see the Burt Rutan influence in your design.” Anastasia cast a nervous glance at Izaak, and forced a smile. “This will be our largest ever audience for Sven, and we hope to warm their hearts! Prepare for takeoff,” commanded Santa. “On it!” replied the two elves, as they snapped into action, hitching his sleigh to the battery-powered behemoth.

Anastasia was a reindeer whisperer, one of a long line of elves who knew the husbandry of these hearty creatures, so she led the biomimetic design of the lifting body and supported the engineering team with thermal analysis. She looked up at the skyscrapers of New York City, then at her elfin partners preparing Sven for the Thanksgiving Day parade. “Hopefully the vendors got their parts right,” she muttered, “We certainly have done our part to ensure a traditional Christmas celebration.”

It was the debut of Sven and the electric fan thruster whined as it vectored thrust downward and lifted gracefully into the air. The crowd went wild as they grabbed at their hats, as several blew off in the turbulent downwash. But the parade was also far longer than any test flight thus far. The press was there. The mayor was there. The cameras were live.  Just as they passed the midpoint, as Santa saluted the VIP section, smoke began to roll from the lifting body vents. Santa pulled in his fly-by-wire virtual reins and lowered Sven to the ground, but the smoke only increased. Elves scrambled, parade horses bolted, and children asked why Sven had taken up smoking. The batteries were in thermal runaway, and Sven looked like a well-used frying pan.

Anastasia scratched her head. “With so many vendors, it seems likely one of the interfaces or connectors arced, built up some carbon, and initiated the fire.” Several elves nodded gravely. Santa stroked his beard and added, “Izaak, I’d like you to determine what went wrong. Please inspect the systems and determine what triggered failure. Without Sven, we’ll have a sorry planet full of broken expectations.” 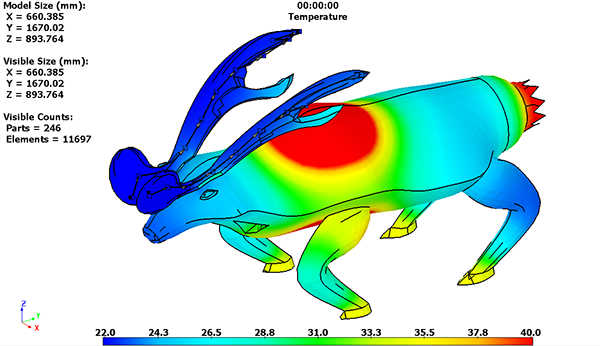 Back at the North Pole Engineering Center, he went through the carbon coated components of Sven. The paperwork trail was complete back to the mill source of each part. Requirements and traceability protocols were exercised to the utmost, but every component met every spec. The state-of-the-art TAITherm battery simulation showed the antler heat exchangers were effective, even at New York’s ambient temperatures. “I can’t square it with reality,” lamented an anguished Izaak to Anastasia. He opened his mouth to speak, “It seems…” he paused, and corrected himself, “It seems like a good time to make waffles.” Walking away, he murmured to himself, “This should have been evident in the parade thermal simulation.” 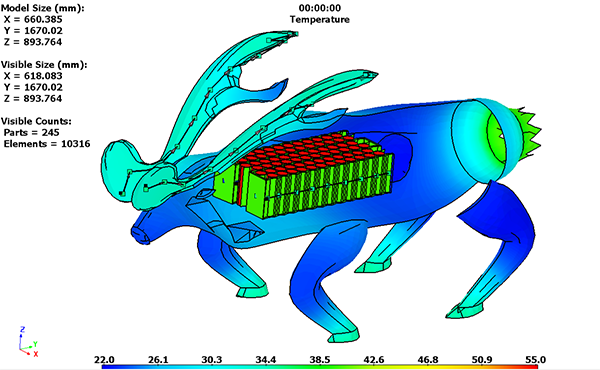 While the other elves slept, Izaak stepped through every part in the TAITherm model. “Fully converged, power load curves are correct for the parade route driving cycle, environmental settings, and geolocation…wait, what’s this?!” The cooling water flow rate fluid stream through the left antler was 20 l/min. “Ha!,” he mused, “Gotcha! Must have been an oversight, someone added an extra zero!” He set it to 2, but he found that the right antler was also set to 20 l/min. The grin melted away. “They’re both set wrong, we physically set the cooling water flow to 40.” His elfin eyes widened as he whispered, “That can only mean one thing.” He looked up from the glowing TAITherm user interface to the big group photo of the elves hanging on the wall, his extended family. “Simulation sabotage.”

The next morning, Izaak was bleary-eyed, but headed out straight to the barn where Anastasia was forking hay into the pasture. “They’re sure hungry today,” she said. “But we don’t have enough hay left to get us through till Christmas, and we are going to need to fly with the reindeer herd since Sven was roasted. Any word on what happened? I’m thinking it was a blown cooler fuse for the battery to go into runaway.”

Izaak looked long into Anastasia’s eyes, and said, “Was it you, Anastasia? Someone set the flow rates to 20 liters per minute and over-predicted the cooling rates of the battery cells, though the as-built spec was 2 l/min. With even just one hot cell, the system was vulnerable to thermal runaway.”

Anastasia leaned on her pitchfork, lowered her eyes and said, “I just couldn’t bear to let Santa sell Donner and Blitzen at the Scandinavian used reindeer auctions. When there was no hay shipment in November, I knew he was banking on FAA Certification of Sven. He knew the collectors market for Rudolf would more than pay for the investment in Sven.”

Izaak put his arm around Anastasia. “It’s sad, I know, but progress means mechanization of our transportation. Just be grateful our engineering and manufacturing operations require infinite flexibility and nimble fingers that exceed the dexterity of the best robotic arms. Besides, Rudolph’s plutonium-powered proboscis means the buyer must prove hazmat handling verification. The market would be limited for him.”

As the two somberly entered the workshop, Santa was seated at his favorite workbench, boisterously singing, “..And a partridge in a pear tree.” As he finished the line he leaned to the right and emitted a staccato blast of flatus in rhythm with the tune. The two elves froze in their tracks for a minute while the plume hung in the air. Izaak broke the silence by dragging a boot along the floor. Santa turned, “Izaak, Anastasia, what brings you here so early, and what’s wrong, dear ones, you’re both in tears?”

Izaak held his breath and nudged Anastasia, who spoke, “Santa, I made the thermal model look like cooling system was adequate, knowing it was vulnerable to thermal runaway.” Santa’s bushy eyebrows raised and fell as he took it in. “I couldn’t bear to lose the herd I love, and since you cancelled the December hay order, I knew it was curtains for them all.”

Santa let out a huff, as he chuckled, “We’re not getting rid of the reindeer, Anastasia, you silly elf. They will be redeployed in a global public relations campaign, bringing our message of generosity across the world and providing jobs for rural citizens left behind by the fourth industrial revolution. The December hay has been redirected to franchised corrals on every continent. I’ll need someone to visit them for regular check-ups. Someone who knows reindeer,” he concluded, peering over his round glasses at her. “Now…do you two think you can have Sven operational before the 24th of December?” 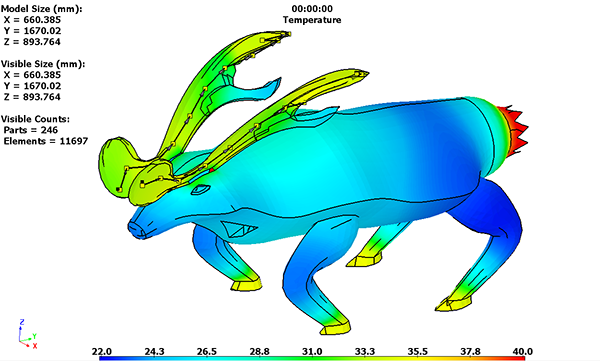 The color returned to Anastasia’s cheeks as she answered, “Our analyses with TAITherm verified that we’re safe at 20l/min and the performance curve on the pump shows it can reach that flow rate, with room to spare.” 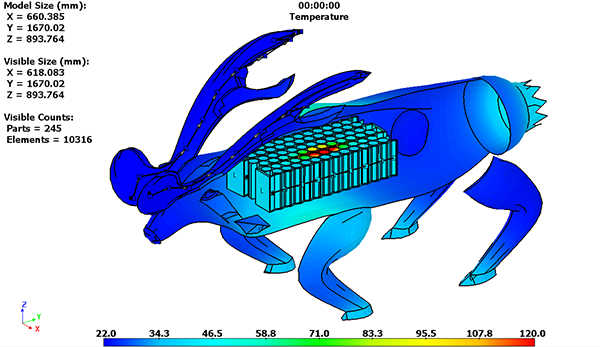 She showed him TAITherm plots that illustrated thermal runaway, and then the re-analysis with higher flow rate, where the hot spot was avoided.  Santa knew he could rely on TAITherm, and declared, “I’ll put a call into the FAA that we’ll self-certify. Can you get the pump speed control set to 20 liters/minute?”

The two elves glanced at each other, stood straight up and replied in chorus, “On it!”