How Izaak the Elf and TAITherm Saved Christmas

It was the best of storms, it was the worst of storms. Santa and Mrs. Claus had been celebrating El Nino's conquest of the Polar Vortex, but they knew it could not last. The warm weather had allowed their just-in-time manufacturing scheme to operate flawlessly. The toys were all made, and the elves had taken the Polar Express to Helsinki for Sauna Week. When the storm arrived, Mrs. Claus was just beginning to take-in the seams on Santa's coat. His CrossFit exercise plan and reduced consumption of seal blubber had slimmed the poor fellow down considerably. Donner and Blitzen managed to conceal their delight with his reduced poundage and decreased aerodynamic drag on the sleigh, until they realized that Santa’s mass reduction would be offset by an equal increase in toy payload. "At least it means fewer trips to Albuquerque," grumbled Vixen, who never enjoyed the thermal stress of New Mexico and Arizona. 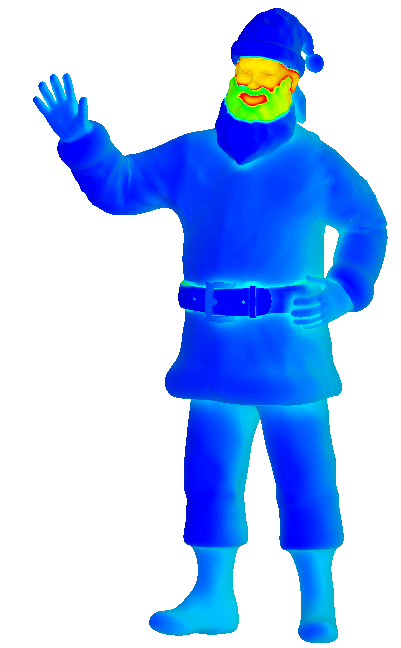 Having ripped out the massive seams on Santa's Jacket, Mrs. Claus was poised to begin placing in the new stitches, to refit his coat and to reduce dynamic aeroelasticity and ensure proper contact with his shirt layers, when the great storm of 2015 moved in. The low barometric pressure brought on an awful case of arthritis, rendering her hands all but useless. Santa lifted the coat, lying in pieces on the sewing table, and groaned as he realized he would have to buy one for this year’s flight season.

Having never purchased commercially available clothing before, he was unsure of what to select, when Santa realized his team already had the TAITherm software needed to analyze the human thermal experience with all manner of clothing, under all weather conditions. Having designed toys for a few millennia, Santa had wisely invested in thermal simulation tools as electronics were introduced. Instead of wooden toys, he now used TAITherm to ensure every manner of gadget would not melt in little Carla's hand nor explode into flames when Jimmy charged a hover board. He thus leveraged all the extensions for TAITherm, including the Battery Extension  and Human Thermal Extension for wearable devices.

With little time to spare, Santa quickly drew up his own requirements document, which included that he must not become lethargic due to hypothermia: he must remain an effective pilot and precise organizer of a few billion package deliveries with seven-sigma accuracy. He then called upon his faithful elf Izaak, with whom he had charged leadership of his thermal management division. Izaak was rather rudely jerked from the sauna but snapped to attention when he heard Santa's voice. "We have an emergency, Izaak." He paused for effect, then added, "I must be assured that a commercially available coat will be adequate for my needs on Christmas. The success of our entire mission is at stake." Izaak gulped, and dropped his birch switch in alarm, realizing that the whole year's work could be for naught, if Santa's core body temperature dropped by even one single degree Centigrade. "Aye aye, Cap’n," he replied, knowing full well his vacation plans had vanished. He finished bucketing off the tar soap and leaped into his lederhosen.

After taking a LIDAR scan of Santa, Izaak began the work of smoothing the point cloud and segmenting the mesh into body components for simulation in TAITherm.

For Santa's requirements, Izaak understood that mass transfer characteristics were crucial, as shown in the material properties. A sweaty Santa was in danger of rapid drops in skin temperature, but, fortunately for Santa, TAITherm's Human Thermal Model tracked transient moisture levels from skin through clothing layers, and adapted layer conductivity accordingly.

"What's your most challenging thermal management problem?" asked Izaak, looking for a worst case scenario and pondering trade studies of insulation versus cost, weight, and fire resistance. Santa did not hesitate to respond, "The mall to mall flight pattern." After soaking in a warm shopping mall and smiling till his face hurt, he would exit the roof service door, and fly at five meters per second for an hour to reach the next mall. "I can handle the people, but it's the rapid temperature change that gets me, going from sweating to freezing," he told Izaak, who was already preparing his weather files for a batch run of key cities around the globe with malls.

Izaak explained, “Santa, I can simulate any kind of coat or jacket, but I will need inputs for thermal and evaporative resistance, as well as standard physical properties.” After squabbling a bit over units and flux values, Izaak and Santa agreed that they should make multiple runs to bound the solution, given the importance of their mission, with a wide range of mall humidity conditions, and uncertainties of weather over the Bering Straits. We limit our discussion to a single representative case. 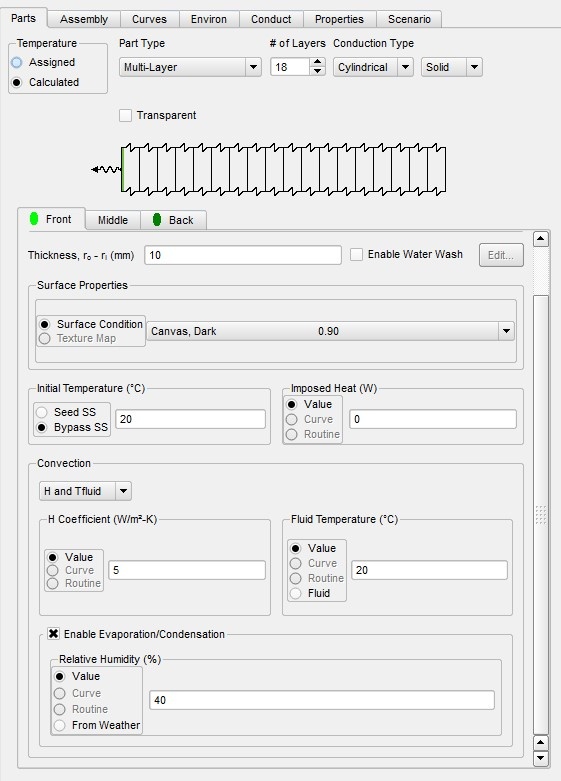 Crucially, Santa never left home without his very substantial 5mm long johns, which offered comfort but with the tradeoff of increased time at his frequent rest stops.  Seen below are the properties for the long john layer, shown highlighted in the TAITherm Part Editor tab.

"I'm placing the 'virtual you' into a 20°C bounding box environment in TAITherm, until you are acclimated," said Izaak. "Does that include a radiant boundary as well as ambient air temperature?" asked Santa. "Of course," replied Izaak, "but I've 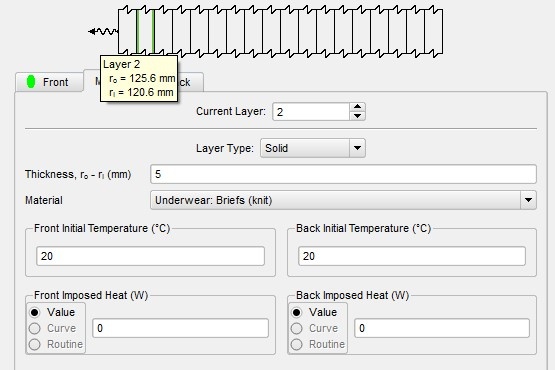 actually made the ceiling radiant temperature a bit higher to account for stratification in the mall, warming the acoustic ceiling tiles." He knew Santa would be satisfied with a detailed answer, even if the assumptions were weak.

"We’ll use transient restart to capture the effects of the transition, and put you into a duplicate model with an outdoor environment, at 0°C, flying at five meters per second.” Santa raised a bushy eyebrow at this. He usually told people he flies at six meters per second, but by the end of the night, the reindeer are tired, full of carrots, and make only four meters per second. Five was a realistic average and he knew of Izaak's low tolerance for back-seat modelers. Santa once saw him throw tinsel at Krumpet during a heated discussion of nylon's conductivity. He wisely accepted Izaak's judgement, and left him to prepare a hot chocolate for Mrs. Claus.

Izaak omitted the detail about where to put Santa on the distribution of human physiology in TAITherm. He chose 80 percent, but did not mention to Santa the good ol’ days when he was a 93-percenter. Within an hour (thanks to the speed of TAITherm), Izaak had results, and Santa reviewed them closely. 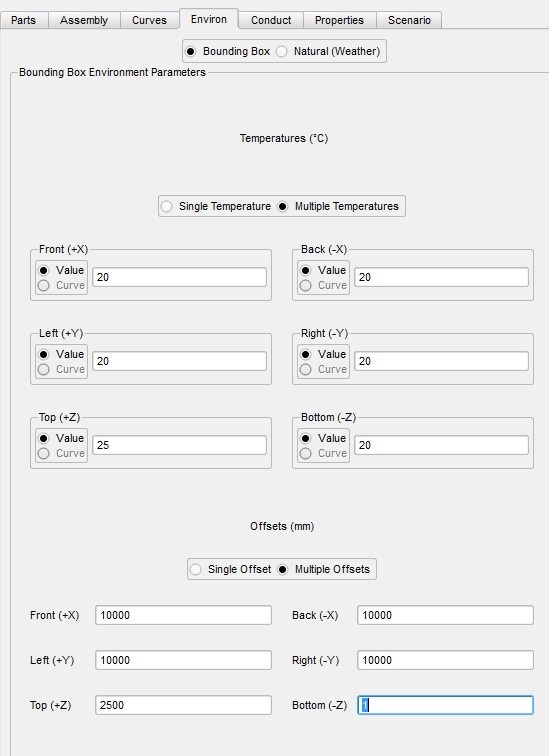 Santa squinted and looked up at the ceiling “Shouldn’t it be 98.6?”

Izaak explained, “Skin temperature can be well below core body temp. We can run a full sensation and comfort analysis using the Berkeley model to determine how you’re likely to respond….” Santa’s eyes had that glaze that comes from staring across a vast gap in knowledge, and he raised a hand. “No Izaak, for my needs, your recommendation alone is sufficient.”

Santa immediately went online and ordered the coat next day air. He typed in the delivery notes that the UPS flight crew should sneak him some chocolate chip cookies, which had been banished from his menu for the past few months. 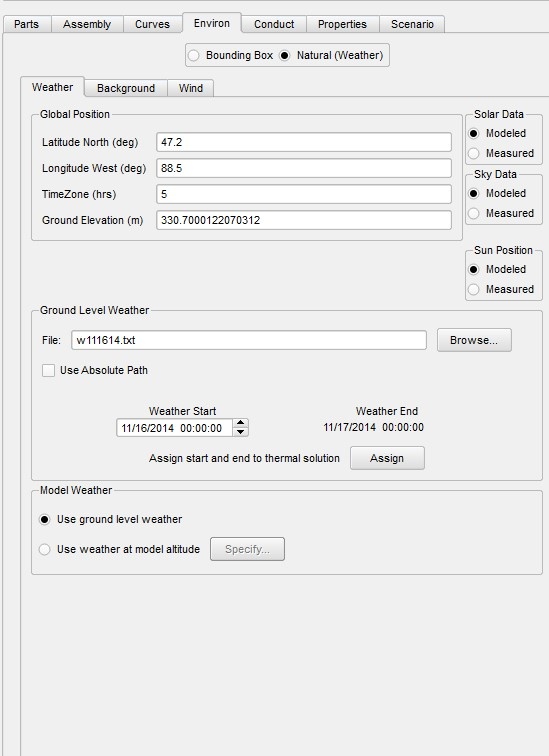 When the shipment arrived the next morning, he was in the barn with the reindeer. He knew the smell of chocolate would alert them to his secret cache, so he distracted the reindeer with a moose joke. Dasher laughed so hard that a cranberry shot out his nose and hit Prancer. As a young caribou in Lappland, Dasher had borne the hazing of many a bully moose until Santa recruited him from the farm league. Now the moose all looked up to him.

Santa stepped proudly into the house wearing his new red jacket. The pockets bulged slightly but that was not unusual as Mrs. Clause looked him over. “It fits you well,” she exclaimed, “but will it be warm enough? It’s not my proprietary uberwool textile, ya know.”

“Izaak and I have ensured my thermal comfort and effectiveness for a safe flight.” Mrs. Claus wanted a selfie with him, but it took a while for the two of them to figure out the phone and pose by the fireplace. Heated to the point of perspiration, Santa headed out to the shop, and reached for a precious cookie. Unfortunately, the chocolate chips were now very liquid, and he called to Izaak as he withdrew four sticky fingers, and waved them at the poor elf in frustration, “Why didn’t you include the latent heat of chocolate and radiant load from a fireplace in the simulation?” Izaak was unfazed. “We could have. But it was not in the requirements, Santa, and besides, you can’t have that junk.” They commiserated with a bro hug, and then called the reindeer from the barn.

As he climbed onto the sleigh for the first of many round-trip delivery runs, Santa said, “Well Rudy, we’ll need your nose in high gear to see through the fog and snow. At least this storm will keep the air traffic down.” Waving to Izaak and Mrs. Claus as he lifted off, he judged his thermal comfort to be quite high. “I should have bought a new coat centuries ago,” he thought.

Santa rang Izaak as he came into cell service over Iceland, “Izaak, the coat is doing well. Now put together another thermal model…this time include the sleigh, and see if you can fit a glass canopy on it for next year….and heated seats.”

“Aye aye, Cap’n,” he replied, knowing that a thermally comfortable Santa in an environmentally controlled cabin would benefit all of humanity–dispensing his gifts more liberally to those on his nice list, and to the naughty ones as well.